The Story of Rabbi Meilich Silber
Rabbi Yaakov Rosenberg
In stock
Be the first to review this product
$24.99
Add to Wish List
Skip to the end of the images gallery
Peek Inside 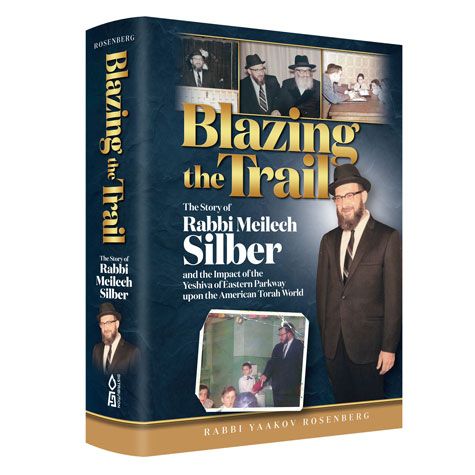 The story of Torah growth in America is, on the whole, the story of a new generation that found a calling in Torah that was unknown to their parents. The idea of their children going back to Yiddishkeit, or to a stronger Yiddishkeit, is a miracle of hashgachah, a fulfillment of Hashem’s promise about the eternity of Torah.

In Blazing the Trail, you will meet a young energetic pioneer in chinuch, builder of a monumental yeshiva on the old streets of Brooklyn — who fought an uphill battle to create a generation of b’nai Torah from committed and non-committed Jews.

Follow Rabbi Meilech Silber from his youth in Nuremberg, Germany, to a new world in New York. Experience the challenges young immigrant families faced in trying to uphold the values of the old world in the new. Meet the brave heroes who forged the path for others to follow.

Most of all, behold the growth of a small neighborhood yeshiva, as its new menahel sets out to make it flourish with a new, untested model. Together with a staff of young yeshiva graduates, Reb Meilech embarked on a mission to build a yeshiva that would redefine Torah chinuch in America.

The trail he blazed over fifty years ago is still being traveled today by the countless yeshivos and b’nai Torah that have emerged in the United States in the half-century since his sudden, untimely passing. This is the story of how it all came to be.