Birchos Re’iyah, Shevach, V’Hodaah
Rabbi Yehoshua Freilich
In stock
Be the first to review this product
$19.99
Add to Wish List
Skip to the end of the images gallery 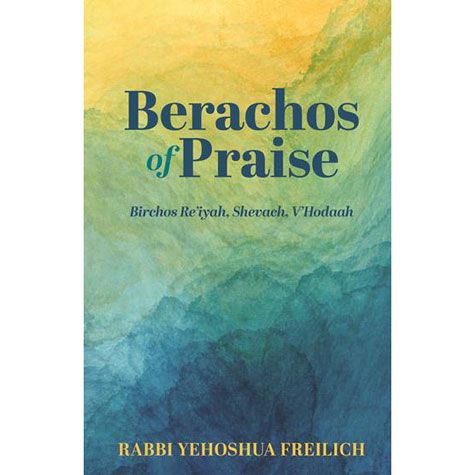 There are berachos for: Rainbows. Earthquakes. Bodies of water. The desert. Cemeteries. Old friends. Exceptional creatures. Miracles. And more.

These “uncommon” blessings are…not so uncommon. Many fine Jews refrain from saying them either because they aren’t aware of them, or they (mistakenly) believe that today nearly everything is a situation of doubt, so it is better not to say anything.

With this important sefer, respected Torah teacher and talmid chacham Rabbi Yehoshua Freilich brings clarity to an often-neglected area of halachah. Carefully sourced and organized for easy use, readers can now bring these blessings — and blessing — back into their lives.

Rabbi Yehoshua Freilich has been a leading force in women’s education for over forty years. As dean and founder of Bnot Chayil seminary and subsequently Baer Miriam seminary in Yerushalayim, he has been a constant inspiration to its hundreds of students. He has given halachah shiurim to students in many of the yeshivahs and seminaries in Yerushalayim, as well as to the local women in the Bayit Vegan neighborhood.

In the United States, he studied with Rav Yisroel Eliezer Kanarek in the Ohr Hameir Yeshiva of New Rochelle. From there, he continued his studies in Yeshivas Rabbeinu Yitzchak Elchanan, studying with Rav Y.B. Soloveitchik and Rav Dovid Lifshitz. After making aliyah, he became a devoted student of Rav Chaim Pinchas Scheinberg, studying in Yeshivas Torah Ore. He had a very close relationship with various rabbanim in Yerushalayim and a very special relationship with Rav Yehoshua Neubert, where he received much guidance in halachah. Recently, Rabbi Freilich founded the Dr. Bank Kollel, a kollel for English-speaking baalei batim in Bayit Vegan. He has been the rav of the Acheinu Bnai Yisrael congregation in Bayit Vegan for many years, where he continues to inspire many every Shabbos.